“Babe” He said, standing against the door

“Don’t you dare call me babe. Don’t!” I was furious.I sat on edge of the bed, covered my thighs with the blanket and looked through the window.

I hated him so much and he knew it. I hated the hold he had on me and the fact that though he kept straying, I still couldn’t leave him. Why did I even move in with him anyway? I was too scared of being alone and was so quick to move in with a guy I’d been seeing for just six months, call me ‘messed up’ and I wouldn’t care.

“Maybe I should just leave” I thought to myself. He had been away for a week without telling me where or what he was going to do. I woke up to find him gone and what was I supposed to do? How does a man just up and leave after a long night of mad sex and deep conversation that we’d had for the first time ever, since we started sleeping together?

I went to bed imagining things and thought I’d finally met the one. What was I to do after he left? Pack and leave? NO! I kept waiting for him to come back; I kept calling, sending texts and stalking him on social media. He would come online, read my messages and not reply. Like, what the heck did I do wrong? Did I say something wrong that night? Or did he just realize I wasn’t the one? And even if he didn’t think I was right for him after we had opened up to each other about our dreams, fears and every other thing about our pasts, why couldn’t he tell me? It would’ve hurt but not worse than what he did, leaving me hanging with all those ananswered questions.

I don’t know where the tears came from but the next thing I knew, I was crying. I’d never cried in front of anyone; I never did. But there I was crying because of a man. Foolish me! Why did I have to be that dumb to let my guard down for a man who obviously was just okay with having my body all to himself and wasn’t interested in getting into anything deep with me? He needed my body and I gave it to him willingly. I didn’t stress him, I just gave in on the first night because I wanted him too and didn’t see the need in playing hard to get.

The tears ran down my cheeks and I hated that he was there watching. I was completely lost in thought and didn’t realize he had walked closer and was sitting next to me. Only thing that made me know he was just an inch closer was the throbbing of my golden flower. Oh Lord! I forgot to mention how strong his dick game was. It was the main thing that caused me to move in with him. I’d never had an orgasm from mere penetration till I met him.

His dick was just fire and when he slid it inside me, the sensations that ran through my walls up my body, felt like HEAVEN. How could I let the human who owned the best dick I’d ever had go? How?
As the thoughts ran through my head, I felt his hand moving across my shoulder and I shivered. ‘Oh how I miss his touch!”

I turned to look at him and he touched my cheek with his other hand and wiped my tears with his thumb. The gesture melted my heart and I cried more. I loved him so much and though I hadn’t voiced it out yet, he knew it. How could he not know when I wore my emotions on my sleeve and everything I did screamed, ‘I LOVE YOU?’ That’s my weakness and I’ll give anything to have it taken away from me.

“Talk! Ask him why he left” I heard my inner self say and before I could say anything, he said the words, ‘I’m sorry I left you hanging. I had some business to take care of and didn’t want to bother you” I know how dumb this sounds, but it did the magic.

It just made me feel better that he said he was sorry and had found his way back into my arms, meaning he missed me. I was a fool in love and couldn’t think rationally.

He leaned forward and I felt myself breathe heavily. I closed my eyes, anticipating the feel of his lips against mine and when it happened, my heart leapt. I felt all my walls crumbling down, and I let myself go.

He smelt like wine; he grabbed my upper lip with his moist lips and sucked on it. As he did that, everything within me was fully up, yearning for more. I needed him closer; needed to feel like we were one. I put my hand on his back, moved closer and as smart as he was, he understood what I wanted.

With one hand holding my ear and the other grabbing my back, and his lips still on mine, he leaned closer and pushed me gently to lie on the bed. I grabbed the back of his head then, with my legs wide open to welcome him completely into my body.

He grabbed my lower lip, bit on it and swept his tongue lightly over my lip. I did same with his upper lips in a swift motion in unison with his on mine. He slid his tongue into my mouth to explore it. He moved all around my tongue as I did same with him. It was so sensual and was doing amazing things to my golden flower. His huge dick was already up and was directly on my flower through his shorts.

I hated that there was a fabric separating his skin from mine because my girl was already heated and screaming to be touched. It was too soon and we could’ve kissed a bit longer but I needed something else. I needed the real deal and I had to get it. I broke away from the kiss and whispered while he had a confused look on his face,

‘I need you inside me’

That threw him off the bed like lightning. He’d also missed me and our Big Daddy stood staring at me after he was able to take of his clothes in a minute. Speed has nothing on men when pussy is involved.

All I had on was a t-shirt and my G-string and instead of taking it off to save time, I waited for him to do it. I love it when he pulled down my panty; it’s my own way of feeling like my golden flower was a treasure that men have to open a lock to. I arched my back downwards and moved my ass up, as I waited to feel his hands on my butt.

In a split second, he smacked my ass so hard that I squirmed. Oh how I loved that! He smacked it again and I looked back and smiled at him.

Then, he held my string and pulled it down slowly, just like I like it and the next thing I knew, his finger was on my flower. He shoved it swiftly inside my privacy and it felt so good that I let out a loud moan. I’d been starved for a week; I actually felt like a virgin who was feeling a man’s touch for the first time

‘Your dick please!’ I begged

He leaned closer to my back and I felt the tip of Big Daddy on my clit, I moved my ass farther upwards gesturing for him to enter my privacy and before he did, he smacked my ass again.

I squirmed and felt him move inside me. It felt so amazing and I clenched my vaginal walls to claim it and pull him in. I heard him moan as I clenched my walls tighter, and his full length was inside me. That was it! We were one; there’s nothing extra than that.

He held my braids, and pulled it as he moved in and not-completely out of me. I’m a screamer and couldn’t help the cuss words.

‘Fuck! I missed this! Fuck me harder. God! Why are you so good?”

I sustained the grip on Big Daddy throughout and tried clenching my walls tighter. He told me how much he loved it and who was I to not want to please the owner of my Big Daddy?
As he shoved his dick in and out, I moved my hips up and downwards in the same rhythm to meet him halfway when he was moving back in. And before I could say Jack, I felt it coming. The sensations intensified, the pressure increased and I screamed,

I couldn’t help my leg shake as the sensations run through my body. He got off of me and I hugged myself as I basked in the glory of the sensations I was feeling. It felt so good and I wanted more. There was no way I was ever going to get enough of Big Daddy and I wished we could be together for long but what was the guarantee?

I kept sucking and squeezing his nipples and broke away when I felt it was enough. Then, I got up and turned to face big Daddy with my ass on his face. I grabbed big daddy with my hand and I felt his tongue on my flower 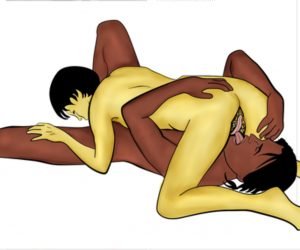